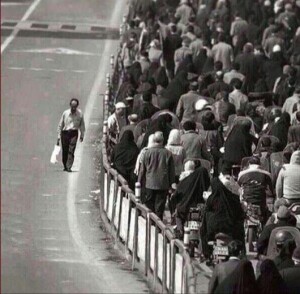 A Biblical Worldview [BWV] demands that we think as much about tomorrow as about today and that we exercise our ability to think critically by observing and recognizing patterns of reality – and then connecting the dots.

Long-term critical thinking is a foundational principle of true historical Christians, especially for the Born-again who also have a Biblical Worldview.[less than 6% of American adults fall into this category]

This parable teaches those of us who can think critically that the majority of humanity chooses the path of the herd which is almost always the wrong path. In fact, if this parable teaches you anything it is that if the mob is going one way, the truth is likely in the other direction.

It’s time to start separating ourselves and creating our own communities of churches that teach and follow a truly biblical worldview, businesses to give our money to and to work for, and all fields of medical people [doctors, dentists, nurses, etc] including pharmacies, and alternative education sources for our children.

Think of the implications this is going to have not just on our mass psyche, but also on what happens when 10% to maybe 30% of those injected begin to die or become so debilitated that they can no longer function.