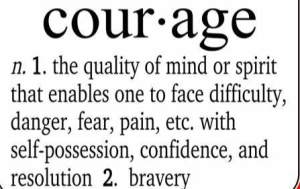 I cannot speak to what is happening in Europe and Scandinavia, but I don’t doubt the subject of this interview because I see the same thing here in America.

I am involved in several causes that are intended to battle the corrupt and inaccurate worldview of the progressive leftists and the ones doing most of the heavy lifting are women.

It is because the male species in America, and it seems the world over, have lost their courage [I come from an era that calls it “their balls”]

One of the great gifts you can give yourself is courage.

Sometimes it takes courage to remain silent but more times than not it takes more courage to speak out when you know that what you are going to say is unpopular.

Courage is the unwillingness to put up with and support lies and the liars who tell the lies.

Have the courage to stand up to lies and speak truth.

The left needs you to be ungrateful.

In a remarkable interview Danish journalist Iben Thranholm said this about the disappearance of Western manhood: Dear European Men: You Are Pathetic Pussies.  This is a Danish woman’s conclusion.

Thranholm says that Western men have been feminized and Western women defeminized. She says feminists have destroyed men, who are now raised to be women. Consequently, there is no one to protect white women from the sexually aggressive immigrant-invaders brought into all European countries by the anti-white European Union, an enemy of national sovereignty that wants the destruction of European ethnic nationalities.

Iben Thranholm says Western men have been deprived of strength and confidence by feminism.  All over Europe, white women of European ethnicity, French, German, Danish, Swedish are raped openly in public by the privileged people of color welcomed in by scum like Merkel, the corrupt French governments, the bought-and-paid-for Italians, the dumbshit British, and the white men just look away and walk on by. Not only has feminism deprived men of any sense of obligation to their women, they are scared to death of being arrested for offending a person of color by interfering with his rape of a white woman.  Indeed, in Scandanavia women are not only afraid to leave their homes, they are afraid to report their rape, because the police might charge them with a hate crime for claiming rape by a protected person of color. In Sweden the protection of Swedish women is so nonexistent that it is becoming a right for a person of color to rape a Swedish woman.

IT IS BETTER TO BE DIVIDED BY TRUTH THAN UNITED BY LIES!!