One of the great gifts you can give yourself is Courage.

The Greek word parresia (παρρησία) is used 31 times in the New Testament. It means boldness, confidence, courage, and fearlessness.  All words found in the Bible that relate to the concept of parresia.

Jesus spoke with parresia like no one ever had. He spoke with courage because He only spoke Truth.

Jesus answered him, “I have spoken OPENLY (παρρησία) to the world. I have always taught in synagogues and in the temple, where all Jews come together. I have said nothing in secret. (John 18:20 ESV).

Because Jesus spoke with parresia, He inspired others to find their own Voice and speak in courage as well.

Now when they saw the BOLDNESS (παρρησία) of Peter and John, and perceived that they were uneducated, common men, they were astonished. And they recognized that they had been with Jesus. (Acts 4:13 ESV)

Parresia (παρρησία) is the truth spoken without shame. Unfortunately, parresia is in low supply, not just amongst our culture but sadly, in our church as well.  The American church no longer influences our culture. Rather sadly, too many of our churches are influenced instead by the political correctness of progressive Marxism.

Parresia (παρρησία) is what the church needs to effectively preach the gospel and once again place its influence on our culture.

How important is Truth?

Scripture tells us to “put on the whole armor of God, that you may be able to stand against the schemes of the devil” (Ephesians 6:11, ESV). Paul tells us (in Ephesians 6:14) that truth is the very first thing we should put on. When Paul mentions truth, he is clearly talking about the truth of Scripture (e.g., Ephesians 1:13; 4:25; etc.)

“Here is the great evangelical disaster – the failure of the evangelical world to stand for truth as truth. There is only one word for this – namely accommodation: the evangelical church has accommodated to the world spirit of the age.” – Francis Schaeffer

We desperately need a “Church” which stands strong on truth; that will not knowingly support a lie.

Sometimes it takes Courage to remain silent but often times it takes more courage to speak out when you know that what you are going to say is unpopular.

Have the courage to stand up to lies and speak the truth.

The progressive-left needs you to be ungrateful because happy people don’t vote LEFT. 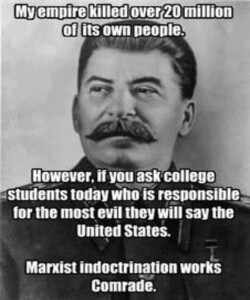 In the mid-sixties groups of Marxist agitators moved in amongst the blacks in America to promote direct action by violence. One of those was Eldridge Cleaver, who had been trained in Marxist ideology/religion and tactics while serving a 15-year prison sentence in California state penitentiary.

In 1967 he became the Minister of Information for the Black Panthers. In his books, Cleaver describes the rationale behind their philosophy of violence.  It was to destroy the whole economic and social structure of the United States so that blacks could enjoy equal rights under an American Communist regime.  And here we are, 50 years later, and now with the help of the education system, media, and progressive churches, America must fight off the lies and liars once again.

During the summer of 1968 over a hundred American cities were racked by Marxist violence via the Black Panthers, but the burning was always in the Black ghettos. The idea was to put the Black population in direct confrontation with police in order to solidify their apparent need to become a racial bloc for the coming revolution.  Their game plan was, as it is today under the Democratic Progressive Marxist Party to sow hatred, ingratitude, insecurity, and racial and class tension.

Progressivism [aka Marxism/Communism] can’t function without having people feel those things.

This is simply Satan’s latest attempt to conquer and divide.

But, the burning and fire-bombing backfired. The Black community wised up pretty fast and realized it was only homes and neighborhoods of blacks that were burning.

In a shoot-out with police, nineteen Black Panthers were killed and Eldridge was wounded. He and his wife would later flee to Cuba and then moved to other Communist countries.

After nearly eight years as an exile in Communist and Socialist countries, Eldridge Cleaver asked to be allowed to return to the United States and face the consequences of his earlier transgressions. He and his wife were no longer atheists. They were no Communists. The years behind the iron and bamboo curtains had dispelled the propaganda concerning “equality” and “Justice” under Communism. Cleaver told the press: “I would rather be in jail in America than free anywhere else.”

He then went on to say: “I was wrong and the Black Panthers were wrong…We [black Americans] are inside the system and I feel the number one objective for Black Americans is to recognize that they have the same equal rights under the Constitution as Ford or Rockefeller, even if we have no blue-chip stocks. But our membership in the United States is the supreme blue-chip stock and the one we have to exercise. (Laile Bartlett, “The Education of Eldridge Cleaver,” Readers Digest, September 1976, pg. 65-72)

Eldridge paid his final debt to society by 1981. Soon after he began speaking engagements in schools, churches, community gatherings, and even prison groups to describe his new and profound appreciation for America. He described the despondency he felt when he finally realized that human rights and human dignity under Communism was a LIE! He described the long and strenuous intellectual struggle with his Marxist atheism before he recognized its fraudulent fallacies. He assured his audiences, just as John Locke had done long ago, that a persistent pursuit of truth would bring them to the same threshold of reality that he now enjoyed, where the Creator could be recognized and thereafter have a place in their lives.

In August 2015, George Barna released results from a survey that revealed why Conservatives do not speak up. It’s not so much because they are afraid of the political correctness of today’s progressive Marxists, and being called names like “bigot”, “intolerant” or “hateful”.

They lack a Biblical Worldview.

Just one year prior to this survey, Pew Research discovered that people want their pastors to speak up on social and political issues.

Why are churches and their pastors themselves afraid to speak the full truth?

It all began July 2, 1954, when Lydon Baines Johnson [LBJ] became angry with two prominent Texas businessmen who opposed him in his reelection bid for the Senate. During the campaign, they accused him of being too soft on communism in America.

When a bill overhauling the tax code was going through the senate, LBJ added a few words to the proposal in what became known as the Johnson Amendment. It passed with no discussion and only a voice vote. [You see, lack of courage and corruption was already running rampant through the halls of congress].

The amendment effectively silenced and muzzled all pastors. Nearly all churches are classified as not-for-profit 501 [c](3) charitable organizations by the IRS.

The Johnson Amendment inadvertently made it illegal for a pastor to oppose a candidate from the pulpit.

First, Here’s an oddity: There are 29 different 501 [c] not-for-profit categories, but the only one suddenly silenced was the church!

Third: The First Amendment guarantees no governmental interference into the pulpit – NONE. The IRS has no authority to dictate what a pastor can and cannot preach from the pulpit, and they know it. At the urging of the Alliance Defending Freedom [ADF], more than 3,000 Christian pastors have intentionally violated this amendment since 2008 by endorsing or opposing a candidate/party from their pulpit and the IRS has not taken a single church to court.

Why Not you ask?

Probably because they do not want the Johnson Amendment to come under Constitutional scrutiny.

Once again, this is a clear example of how our churches/pastors have bought into and supported the lie. They have been more influenced by culture than they have influenced culture instead.

There are three major institutions of influence in America:

Any ideology (worldview) that controls any of them controls any or all of them, controls its people by controlling the culture. Progressive Marxism controls education and the media nearly 100% and now a vast majority of our churches.

A silent pulpit produces an uninformed and politically illiterate electorate.

Before you offer up the tired old objection of “separation of church and state” – know this: There is no such clause in the Constitution or Bill of Rights.

The phrase actually comes from a letter written by Thomas Jefferson to the Danbury Baptist of Connecticut on January 1, 1802, in which he used the phrase “wall of separation” to assure them that the federal government would never intrude into church life.